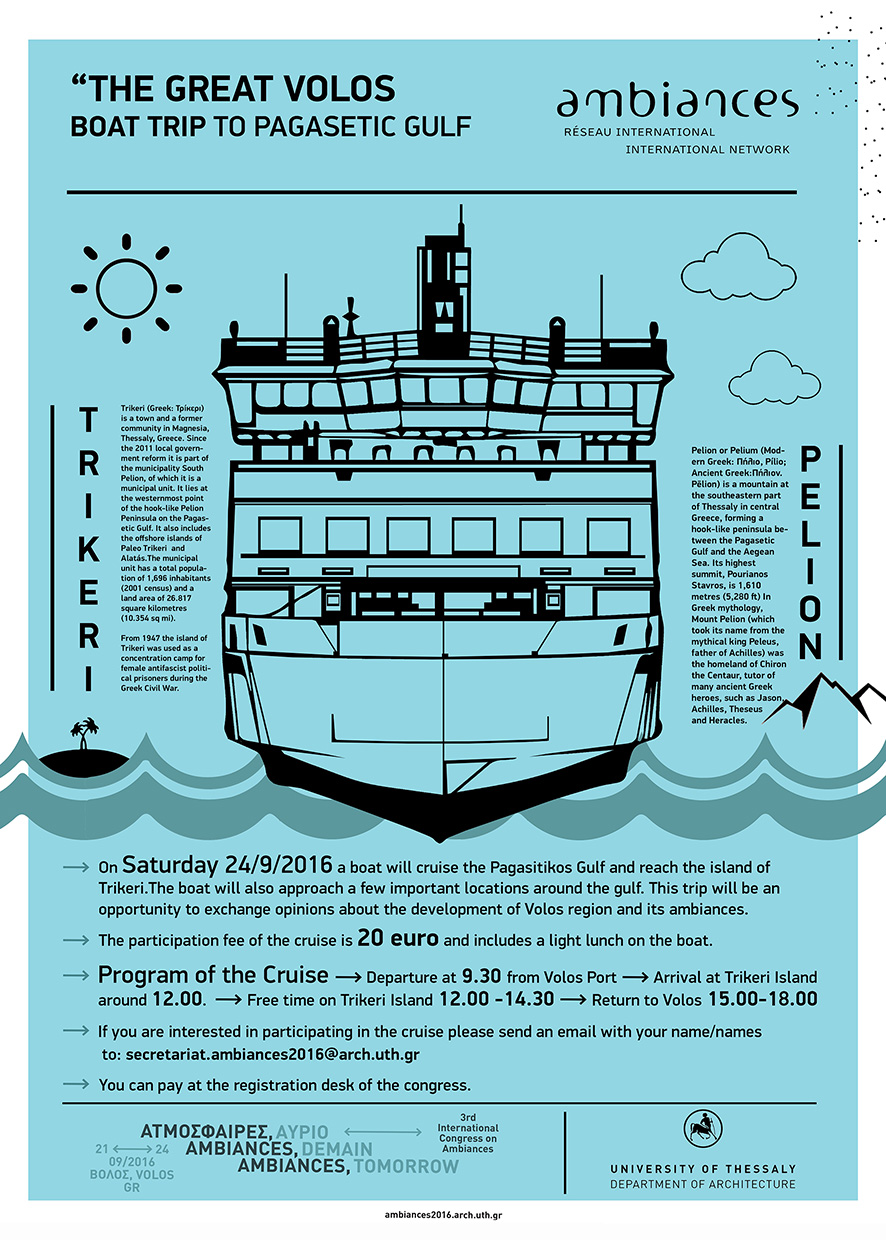 The ambient becoming of the urban world

The growing interest in ambiances and atmospheres is a hint: our sensitivity to inhabited spaces is indeed changing. What about ambiances in the understanding and the transformation of our sensory conditions of existence? Are we not witnessing the emergence of a new ecology of the senses more attentive to the atmospheric existence of our forms of life?  Can we speak of an ambient becoming of the urban world? Asking such questions enables to reveal the powers of ambiances, to highlight what they perform and reflect upon urbanity.
Rather than approaching ambiance as a closed domain of research, we will draw a few lines of flight to help us navigate within this moving ocean: a line of meeting will focus on the various processes of aestheticisation that cross and foreshadow an urban ecology of ambiances; a line of existence will wonder why ambiance is so elusive and why it resists any final determination; a line of paradox will articulate the vital and emotional strength of ambiance and its ability to influence and control; a line of questioning will take the measure of the plurality of the paradigms of ambiance and will question their dialogue and difference; a line of effectuation will accompany ambiance within its material fabric, its effective practices and its scientific uses.

The proposal will be very general, not deepening a particular problem, nor looking for any exhaustive references and pieces of work. Instead, we aim at building a dynamic framework which could provide a basic orientation. We contend that the notion of ambiance operates as an analyser and operator of urban transformations. The purpose will be deliberately exploratory and prospective. The emphasis will focus on the transversal and nomadic characters of the notion of ambiance... on its efficience and modus operandi... on its lesser existence, discreet and subthreshold ...

Jean-Paul Thibaud, sociologist, is Senior Researcher at CNRS. He is researcher at CRESSON research laboratory (Research Center on Sonic Space and the Urban Environment, UMR 1563 Ambiances Architectures Urbanités). His field of research covers the theory of urban ambiances, ordinary perception in urban environment, sensory culture and ethnography of public places, anthropology of sound, in situ qualitative methodology. In 2008 Jean-Paul Thibaud has founded the International Ambiances Network (

The development project of the New Sea Side in Thessaloniki is all about the adventure of meeting a place. It is also a dialogue, because in the concept, the generosity of the context, the moods associated to natural phenomenato of the place are essential. So, it was to testify through this somewhat constant fascination confrontation that provides the landscape and its variations.

A public space is nevertheless not only a place of contemplation. It is now a place of life and use that belongs to everyone, but also to each. Attendance, ownership phenomena and citizen initiatives contribute to realize the nature of this space and infuse its vitality.

Prodromos Nikiforidis and Bernard Cuomo are working together since 1986. Their common path started from the architectural school of Toulouse in the early 80s.

In 2016, they were awarded by the Yan Ye Award Professional Competition and were selected by the AIAC and the A10 to represent Greece at IN practice within the Fuoribiennale Venice. They have taken part in many exhibitions and conferences

Aesthetic transformations of the sensory and aporia of language

Two contradictory trends are apparent in the contemporary world: one tending towards greater uniformity, in architecture, music and such; the other towards further fragmentation. The term ‘globalization’ either causes societies to dissolve, through decreasing differentiation of forms, or to harden in differentialist reaction. But alongside dichotomous rationales – trendy or outdated ambiance, open or closed neighbourhood, innovation or conservation – there is also scope, witness Japan, for a back-and-forth rhythm which contradicts stabilization by means of the principle of identity and deprived third parties.

The becoming of ambiances raises the question of the transformation of space over time. How does time leave an impression on space? How does space express time? Drawing on ethnographic observation of unobtrusive everyday street ambiances in Sao Paulo, Tokyo and Beijing, we shall show that an ambiance is the singular encounter between an environment and a moment, occurring in a (collective) subjectivity involving sharing of the sensory, memory and imagination.

The challenge raised by the theme of the Third International Congress is inextricably epistemological and linguistic. An ambiance cannot be prompted, less still programmed. It is not an ‘object’. It does not unfold in space and time, but generates an unpredictable, indeducible space-time. We cannot ‘have’ an ambiance any more than we are ‘moving’ towards one. An ambiance comes upon us, indivisible, barely expressible yet undeniable. This experience refuses to be broken down into the western dualism of subject and object. Indeed, it is scarcely compatible with the particularity of Indo-European languages in which the grammatical structure of a sentence is driven by a subject of which the position is anterior, exterior and superior, with a tendency to abstract itself from its surroundings, reduced to a mere backdrop. It is impossible to set forth an ambiance, starting from a eurocentric ‘I’, which pre-exists the context and can abstract itself from it. To interrogate the intransitive nature of this experience we shall use the Japanese language, which does not separate subject (shutai), place (basho), setting (fôdo) and connection (ningen). However, despite the difficulty of expressing an ambiance in everyday speech or analysing it – in other words breaking it down – in learned terms (Wittgenstein) – an ambiance can be narrated, sung, danced, filmed and staged. In which case, whatever is no longer represented but rather recreated in this way is another ambiance.

The art of creating relations

The art of creating relations – of connecting spaces, people and “milieux” – will be fundamental qualities of ambiances in the future.

In the past it was limits, autonomous surfaces and borders that were the constitutive elements of urban and rural ambiances.  Today we are at the beginning of an era in which problems of relation matter more.  Such relations define territory and landscape; they are indispensable to social, economic, ecological and architectural regeneration.   New infrastructures such as the Nordbahnstrasse, La Belle-vue Fietssnelweg and Ciclovia Belém illustrate this point.

The modes of action that each of these projects depend on are different from those of project in the past. They are collaborative and do not hesitate to employ tactics involving “guerilla” actions, mock-ups, incremental design approaches, plans for transition as indispensable modalities for the creation of ambiances in the future…

Aglaée Degros is an architect and the co-founder of Artgineering, an office for urbanism based in Rotterdam (NL) and Brussels (BE). Starting with precise observation of the existing territorial realities the office is at the meeting point of the spatial, social and cultural production of space.

Aglaée Degros is a professor at the Institute of urbanism at Graz TU (Graz University of Technology – Autriche).

Already, these words address both space and time. At first reading, they refer to the future of the ambient. But more can be read into them.

For instance, consider equilibrium: if we stand firmly in one spot and try to reach as far forward as we can, we soon have to balance ourselves by reaching equally far back. Standing on the present, trying to reach deeply into the future, we must reach equally deeply into the past.

That’s static equilibrium. If, on the other hand, like Angelus Novus, Walter Benjamin’s past-facing angel, we are thrust into the future by the wind of progress, then no such balance is necessary, at least as long as we keep moving — but, if we stop, we topple. In the blur of our movement, we are blinded —the future is behind us, invisible, and the past, though visible, recedes in pieces, torn to shreds by the storm of advancement. The moment we pause, the moment of potential clarity, is also the moment of collapse.

An ambience is a surrounding. We begin there. Nothing surrounds us as completely as time. We begin there, in time, surrounded. What is the past, present, and future of ambiances?

Ambiancé, the as-yet-incomplete 720-hour experimental film directed by Anders Weberg, will only be shown once, in its entirety, when it is completed; then it will be destroyed. For now, a 72-hour trailer is available. How does one watch a 72-hour trailer, let alone a 720-hour movie? Even more than Christian Marclay’s 24-hour “The Clock,” the only way to watch Ambiancé is to enter its ambiance, to allow fact and fiction to blend into life itself.

Or, consider virtuality — as physical cities crumble or become aggregations of uncorrelated computer-generated forms that reach the sky but neglect the street, corporate body against human body, the coherent architectonic ambiance that permeated actual cities vanish into the cinematic. The architecture of the city is now experienced in movies. The infinite wisdom of the market’s “invisible hand” has decided that it is most efficient to provide atmosphere-in-spectacle and generic utility everywhere else. To this is added the new VR-triumphant, virtual-reality re-emerging from its long wait for the right conditions, finally armed with all the necessary enabling technologies, to a generation prepared to receive it, under perfect conditions. How positive this may be, if it indeed allows us to advance “the poetics of space” — Bachelard’s phenomenological perceptiveness of ambiances, so necessary to a healthy psyche — and still remember to bring back what lessons we learn to the actuality of our lived spaces — and how terrifying it may be, if we use these technologies to further neglect and already overly-neglected world.

Ambiances: the ambient, the Latin ambiens and ambitus, in the end, the ancient Greek αμφιβαίνω (αμφι/amphi/ambi/both sides + βαίνω/vado/to proceed, to encircle), to walk around something, hence to surround it. Words that are related to others we know: amphitheater, amphibious, amphiboly, all about the reconciliation of some kind of two-sidedness that contains the contradiction into a new condition and a new whole.

What is this for our time?

Aeschylus, in “Seven Against Thebes,” has the citizens call upon “ambient demons” to protect the city. Ambient demons, natural forces personified, surround the city as guardians, and the citizens call upon them for protection. We find the same perception in Shinto and in all indigenous cultures that respect their surroundings. And what about us? What of our present, and our future? What demons guard our cities? Is it not clear? Computing daemons, impersonal background processes, armed with machine vision, global senses, artificial intelligence, and the wisdom of the market, all hand and no heart, form an ambiance of surveillance whose stated intention is protection, but whose origin and outcome are paranoia and fear and not reassurance or comfort.

Perhaps our future can learn from our past. Perhaps Aeschylus can teach us something about ambiances:

Atoning for and ambient to the city

Prove yourselves lovers of cities

Take care of the sacred offerings

Accepting them, defend them

Being fond of the city’s sacrifices

Be protectors of them, I ask

Professor Marcos Novak is the founding director of the transLAB at the University of California, Santa Barbara, where he is affiliated with the AlloSphere and CNSI (the California NanoSystems Institute).

He is a researcher, artist, theorist, and transarchitect. In 2000, he represented Greece at the Venice Biennale, where his works have been exhibited several more times since. His projects have also appeared in prominent museums, galleries, and collections in many countries. He serves on the scientific committees and advisory boards of several international journals and conferences.

His projects, theoretical essays, and interviews have been translated into over twenty languages and have appeared in over 70 countries, and have become the topics of conferences and symposia.  He lectures, teaches, and exhibits worldwide.

through the HALHS open archive.